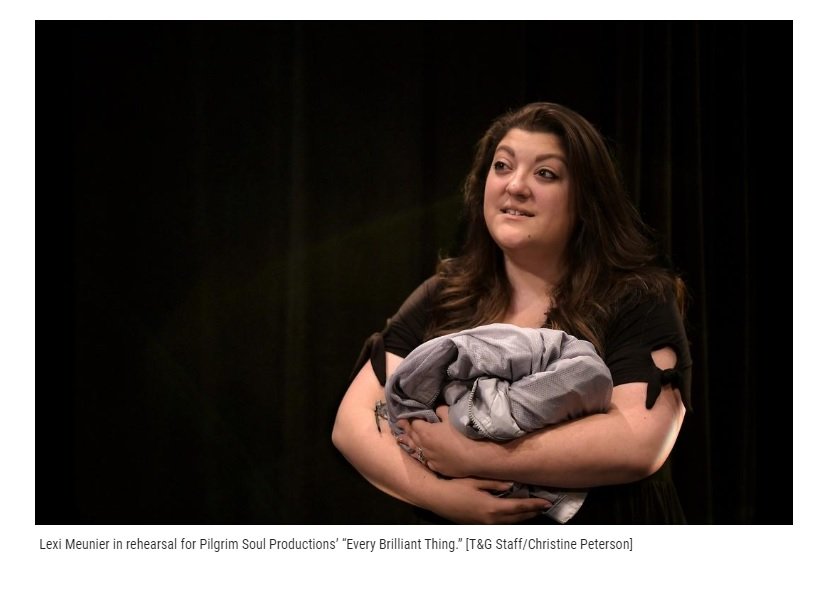 Joy, Hope in ‘Every Brilliant Thing’ in Shrewsbury

SHREWBSURY, MA. — For those who may have never suffered from depression or contemplated suicide, life could possibly seem like a gift. Those fortunate souls might also wonder why anyone would require an actual, physical “list” of reasons to go on living.

Yet it is that very “list” concept that is explored in Pilgrim Soul Productions exceptional offering “Every Brilliant Thing,” staged in the Black Box Theatre inside the Ryken Center at St. John’s High School in Shrewsbury.

The audience-interactive production, written by English playwright Duncan Macmillan with original contributions by English writer-performer Jonny Donahoe, is a one-woman play that delves deep into the turbulent emotional struggles of an unnamed woman portrayed by Lexi Meunier in a bravura performance.

Although the subject matter is dramatically heavy as her character deals with an emotionally depressed mother, a father who struggles with his wife’s attempted suicides, and her own subsequent depression issues later in life, the one element that makes it palatable is the tremendous amount of humor contained within the show’s script.

The “list” is used as a lifeline she throws to save her mother, who is drowning in a turbulent emotional pool of despair.

Starting off with a small goal of 1,000 items, each item is intended to indicate that which makes life worth living. Her character’s list unexpectedly expands to hundreds of thousands of items over the course of her lifetime.

Meunier is quite amiable and thoroughly controls all audience interaction before the play even begins. She hands out parts of the “list” and other props to be interjected by selected audience members throughout the nonstop one-hour and 15-minute production.

Directed by Matthew J. Carr, Macmillan and Donohoe’s play originated in the U.K. and retains certain minor elements that keep it rooted there.

The main character’s pets were named after British figures and the names weren’t changed in the Americanized adaptation. Even the word “Brilliant” in the title leans more toward the British usage of the word to describe something as “amazing” as opposed to something “intellectual.”

There is no set. There are no costumes. Props are minimal. No special lighting. There are numerous upbeat musical excerpts which, in addition to Meunier’s performance and the rhythm of her honest, well-written monologues, help to keep the show from becoming a maudlin experience.

The selected musical tracks were meticulously placed but occasionally had an unexpected humming sound that preceded them.

In the end, what works best is the total immersion in everything to do with this character and her struggles. Her life, her loves, the people who affected her growing up (positively and negatively) and the obstacles she overcomes along the way.

Meunier juggles all of these elements “brilliantly” while keeping the audience involved at all times.

One suggestion: If in the audience and selected to participate, it is recommended you speak loudly and clearly as the sound does not always carry well in the enclosed space.

The show runs approximately an hour and 15 minutes with no intermission.