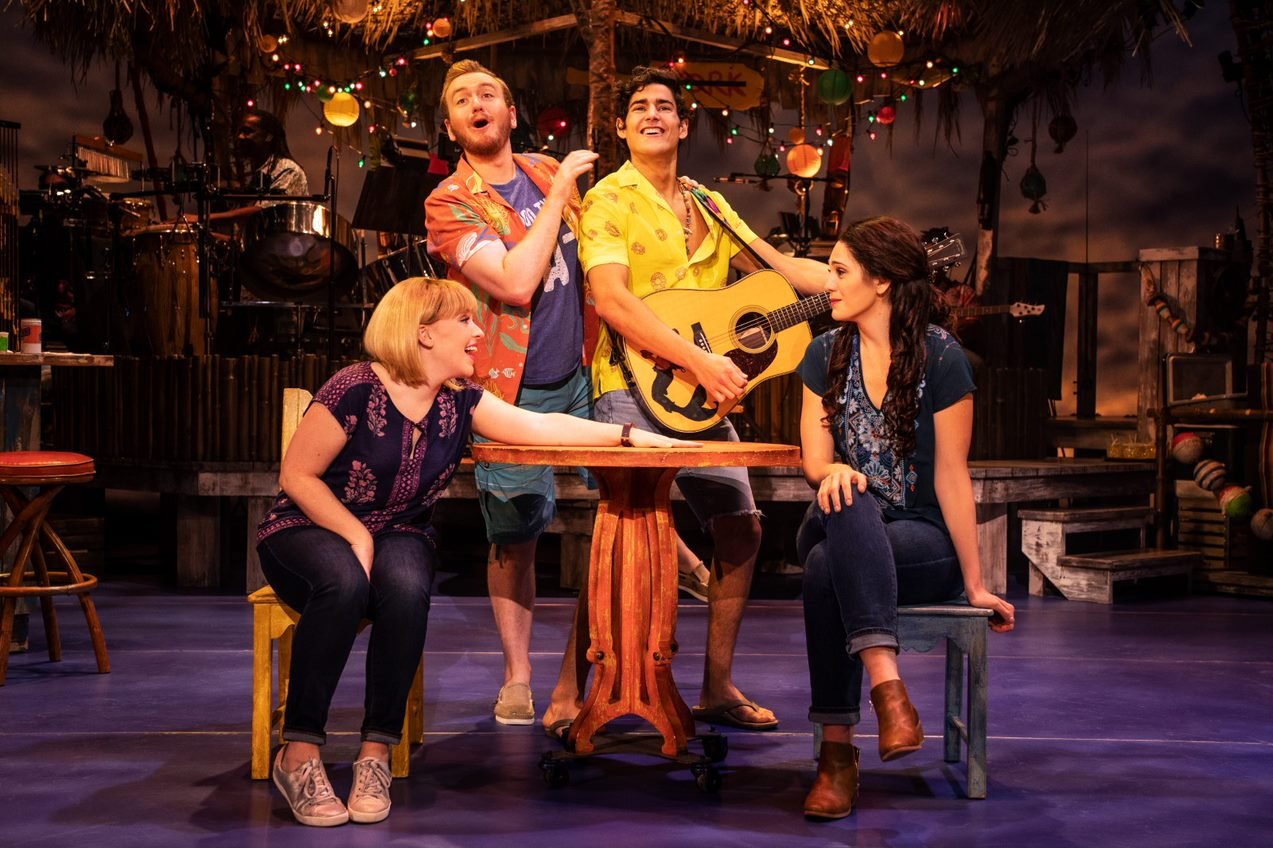 "A musical designed to help you live, laugh and lava"

Music and Lyrics by Jimmy Buffett.

“Escape to Margaritaville” is exactly what one would expect.

For some it will seem like a stage adaptation of that last bad Elvis movie that Elvis never got a chance to make.

Simplistic plot, even simpler subplots, yet still a fascinating attempt to structure many songs from the Jimmy Buffett catalog into something that makes sense.

Here...It does not always succeed.

For others, it is pure escapism. Leave expectations of plausibility at home as it has no business in the same room as this Jimmy Buffett musical.

It succeeds mainly because it does not take itself seriously and there are many memorable tunes by the tunesmith to enjoy in the jukebox musical, be they for the strict Buffett “Parrothead” fan or average theatregoer.

The show, after being on tour hiatus for over 525 days due to the COVID-19 shutdown, now returns and is certainly a nice way to kick off the Hanover’s return to live in-house Broadway level performances after an even longer number of days dormant (closer to 600).

Given its title, surprising to note is that “Margaritaville" is actually LESS about drinking than one might assume and more about tourists having experiences during a remote island vacation.

The Greg Garcia/Mike O'Malley story is about singer-songwriter Tully (Chris Clark), a laid-back rogue with no long-term plans who performs and hangs out at the cozy little “Margaritaville” resort bar on a remote tropical island...located right near an active volcano.

Once again, it is strongly advisable to abandon all attempts to try and think too deeply about the plausibility of the above.

Tully falls for career-minded tourist, Rachel (Sarah Hinrichsen) who is an ambitious scientist primarily focused on her science project to utilize potatoes as an alternative source of energy.

The only reason Rachel is even on the island is because her friend, Tammy (Emily Qualmann) is determined to have one last “girls’ holiday” with her best friend before getting married to her lout of a fiancé, Chadd (Kyle Southern).

At the same time, Rachel and Tully meet and sparks also fly…but not the good kind. At least, of course, not at first.

The chemistry is undeniable between all four actors. The affection, especially between Qualmann and Jordan, seems absolutely genuine. By Act Two, they hit their stride with the ensemble in the big production number, "Cheeseburger in Paradise." 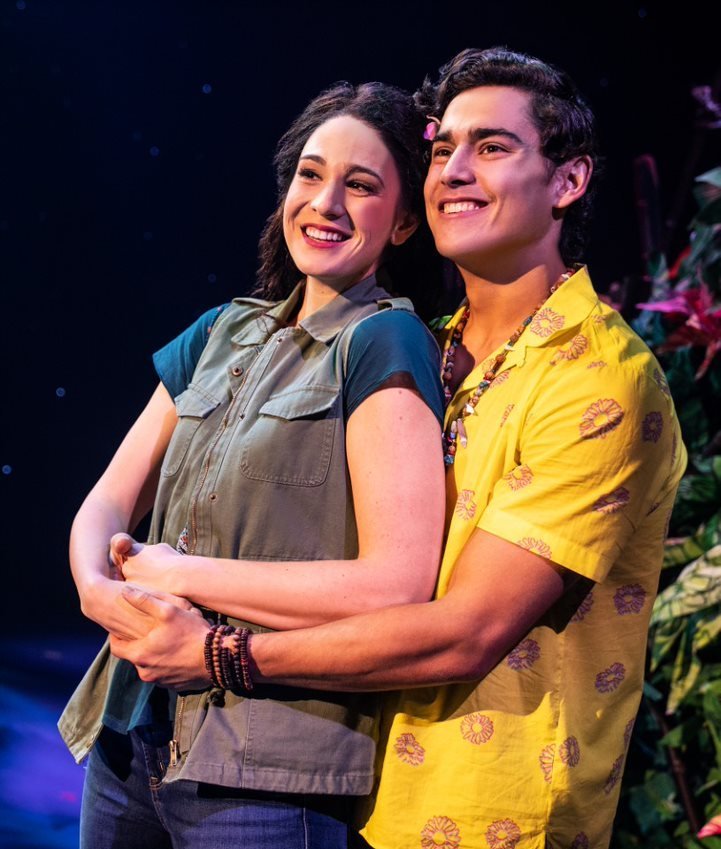 Clark and Hinrichsen achieve better chemistry as the show gets closer to its hardly surprising conclusion. Their first act song, "Three Chords," is one of their better duets as it displays a more sincere affection between the two characters.

Hinrichsen’s solo “It's My Job" is also an unexpected musical highlight as it is a lesser known Buffett tune (at least for the average fan).

There are no storyline surprises here as the show is pure cliché and predictable from the opening number “License to Chill” which got off to a pitchy start.

However, since the show never truly takes itself seriously, it seems to inherently recognize that low expectations come part and parcel with any show existing in the jukebox musical genre.

The tour director for “Escape to Margaritaville” is Amy Anders Corcoran who worked with Christopher Ashley on the original production. Also on board is Tony® Award nominated Musical Director Christopher Jahnke (“Porgy and Bess”) and Choreographer Kelly Devine (Tony® nominee for “Come From Away”).

Devine provides some unique moves throughout the show, adding many elements of humor to routines, especially in the numbers “Fins,” "Grapefruit-Juicy Fruit" and “Cheeseburger in Paradise.”

So, the creative team and ensemble do not let any such low expectations get in the way of at least appearing, virtually, to have a good time on stage so those in the audience can, literally, have a good time.

There are many great songs played, even if only reduced to brief snippets used in medleys at times. There is the mandatory title tune, “Margaritaville,” of course.  But then there’s the wonderful “Son of a Son of a Sailor,” “Cheeseburger in Paradise,” “Volcano,” “It’s Five O’Clock Somewhere” and many more.

A wonderful little surprise was the musical underscoring Jahnke used at various points - the uncredited ‘deep cut’ Buffett tune “La Vie Dansante” (aka “The Dancing Life”) which provided some pleasant listening during some of the longer scene changes.

There was one noisy scene change in the show where the set seemed to bump into a scrim. Otherwise, the scene changes flowed well. Costumes and lighting were absolutely in keeping with the relaxed and casual tropical atmosphere.

The primary set of the resort was very low key – an island hut with tropical birds adorning it (the multi-colored birds were huge and seemed more like feathered refugees from Disney’s “Tiki Room”).

So, post-shutdown, if the ongoing effort of “getting back to normal” has left you already longing for a vacation, then switch off all critical thinking and enjoy the two plus hours of purely preposterous storytelling nonsense and great songs.

Show runs approximately two hours and 10 minutes with one intermission.

Welcome to Margaritaville, where people come to get away from it all, and stay to find something they never expected. With a book by Emmy® Award winner Greg Garcia (“My Name is Earl,” “Raising Hope”) and Emmy® Award nominee Mike O’Malley (“Survivors Remorse,” “Shameless”), Escape to Margaritaville is a musical comedy featuring both original songs and your most-loved Jimmy Buffett classics, including “Fins,” “Volcano,” “Cheeseburger in Paradise” and many more.

USA Today calls it "A little slice of paradise!" and Entertainment Weekly raves, "It will knock your flip-flops off!" So don't let the party start without you.