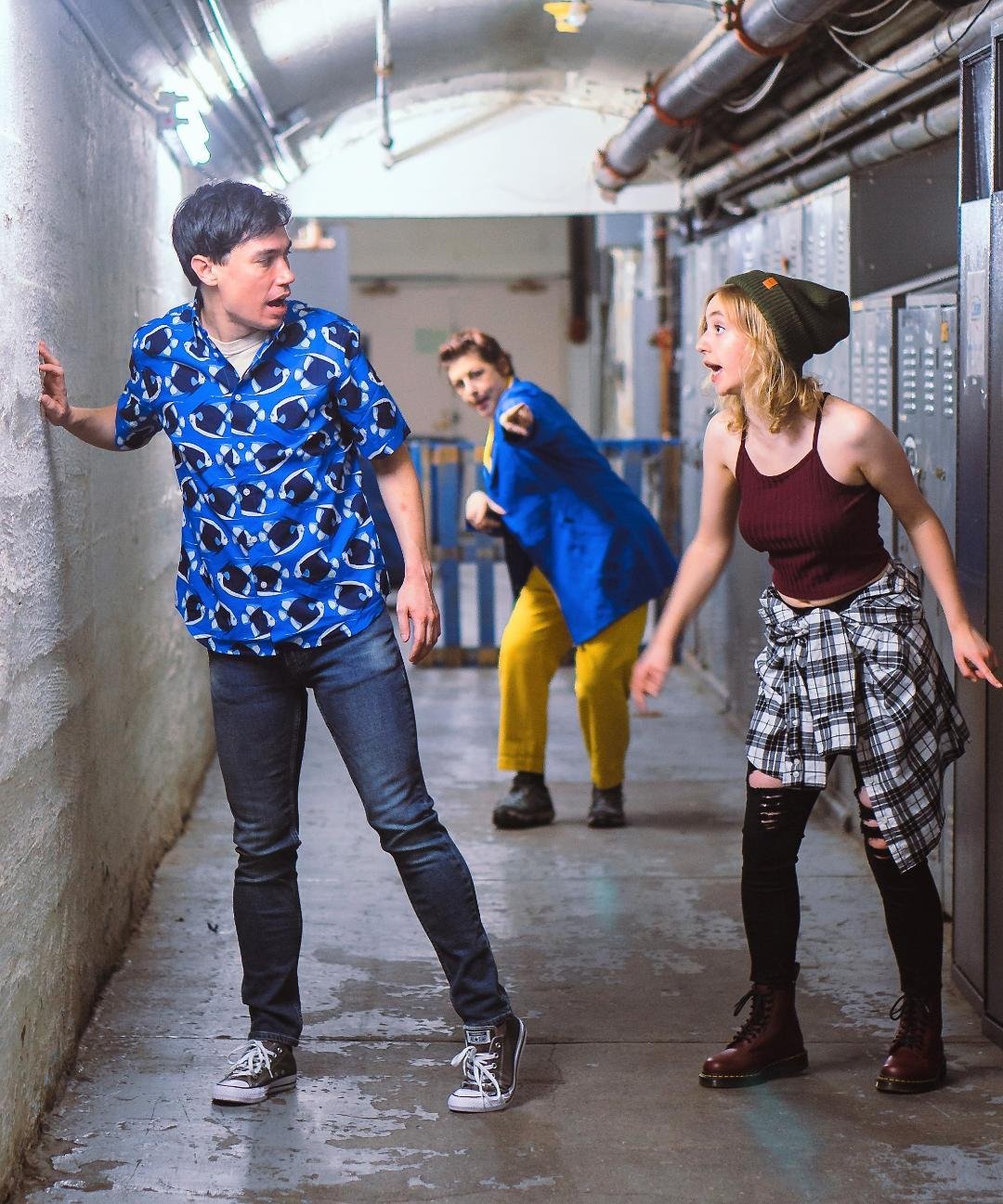 Written by Peter Sinn Nachtrieb and set in what appears to be a post-apocalyptic underground bunker, the stage looks like the inside of some high-end ‘yurt’.

The bunker contains a bare minimal of items with which any Armageddon survivors would need to subsist underground.

There is a table with two chairs, a small sofa, a working closet, coffee table, a small kitchenette area, an aquarium far stage left, bunk beds far stage right and a fire extinguisher and first aid kit mounted on the back wall.

It appears as though fresh oxygen is piped in through long tubing connected to the wall.

If people had to spend more than a weekend in such a location they just might go mad. But the bunker is actually not there in case something should occur…it is there because something that already occurred…the extinction of humanity.

We are in a futuristic “evolutionary museum” exhibit which simulates, what scientists presume was, the rebirth of the human race with a new Adam and Eve, or in this case, a Jules and Jo, played respectively by Nicholas Yenson and Wellesley College senior Chloe Nosan.

The one problem with the new Adam and Eve scenario is that, as the simulation unfolds, Jo was tricked into the bunker by Jules and thought she was there more for sex not a life altering event. She becomes agitated with Jules once he reveals himself to be not only a homosexual but a virgin homosexual to boot.

Over on far stage right separated from the staging area is a small percussion set consisting of a gong and kettle drum. There is also a podium filled with all sorts of controls required to operate the simulation. Manning both the percussion and the simulation is the curator of the exhibit, Barbara (Stephanie Clayman) who has completely invested herself into the telling of the story.

As the couple learn they are last two people on Earth, it becomes clear that the fate of humanity is thrust upon them and Jo wants nothing to do with it and tries, repeated and unsuccessfully, to escape the bunker.

If the play were any longer it might easily lose its charm as it really could not sustain itself as strong as it is or effectively it does as a further prolonged piece.

However, as the play unfolds, under the direction of Marta Rainer, the pacing of the show is thankfully brisk and fluid. All the performances are steady, surprisingly believable (considering the play’s preposterous premise) and, above all, personable.

Yenson and Nosan, in particular, have great chemistry in their partnering which is quite physical at times and requiring great inter-dependency due to the structure of Sinn Nachtrieb’s story. Clayman as Barbara is gregarious, comical, optimistic and makes us root for her from her very first entrance.

We relate with these three characters. We like them. We have concern for them and even have compassion for them, despite their respective situations being all somewhat precarious and un-relatable. This is all thanks to the actors’ commitment to the peculiarity of, and almost “O Henry” premise of, the Sinn Nachtrieb story.

The set design by David Towlun has great attention to detail and is so impressive it looks like the type of exhibit one might see at Disney’s Epcot. The futuristic costume design by Chelsea Kerl also enhanced the look and feel of the production.

Both thought-provoking and entertaining, the production is also a compassionate look at the human condition past, present and future.