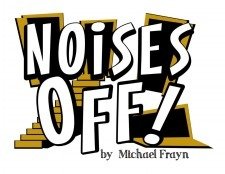 LUDLOW, MA. - Michael Frayn’s “Noises Off,” just short of 40 years old, has become a staple non-musical for many theatre groups. There is a reason for it. It is literally one of the funniest shows ever produced in the last four decades.

The farce concerns an eccentric troupe of performers who are taking their comedy, “Nothing On,” on the road. Throughout a series of rumors, conjectures, misinterpretations and sexual dalliances, all hell breaks loose back during rehearsals, back stage and, ultimately, on stage.

Acts One and Three we see the mammoth front of the set which also has a bay window and multiple functional doors. Act Two the set is shown from behind.

But the show is also a mammoth undertaking for any group and Exit 7 Players of Ludlow, which produced the show back in 1991, are taking it on again, this time under the direction of Bruce Torrey. As he points out, it is his first time directing the three-act play, and is pleased to be doing it with the Players.

“I have not directed the show prior to this. In fact, I'm making my debut as a director of a full length stage play here at Exit 7,” Torrey says. “Very grateful to have this opportunity. I have only directed short 15 minute plays prior.”

Coming to be part of the Exit 7 Players troupe in 2016, Torrey has since assumed multiple roles including stage manager, sound technician, actor, set builder and more.

With “Noises Off,” Torrey also supervised in the design and construction of the set.

Michael Frayn’s stage directions (which he has occasionally re-written over the years) are so meticulously precise, not only from a staging perspective, but also in working with the set design itself.

This leaves very little “wiggle room” for a director to experiment and try different interpretations with, well, much of anything beyond characterization in “Noises Off.”

Torrey discusses if this presented any unique staging challenges for all involved in the show.

“Yes, this sure did-- but only just a bit,” Torrey says. “I looked at it as a helping hand with direction in building the set. I had to make it (the set) fit our stage size. Once I figured out my ‘pivot' point - I built it from front of stage to rear wall instead of building from wing to wing (before I could build upward). The top of the walls on the upper deck are built to accommodate the theater teasers during rotation.”

And, as for Torrey’s cast in “Noises Off”?

“As for cast - they had many (challenges) along the way,” and, Torrey adds, “Timing probably was the most difficult issue - making it possible to enter/exit just within seconds of each other without sight lines, and having to deal with stairs as well.”

All of the cast members are American actors playing English Actors. One of the comedic challenges for the actors, under Torrey’s direction, is with the overlapping dialogue which is executed throughout the play.

Given the size of the full stage set and the aforementioned changes in between acts, it can be interminably long to make the switch from front to back, then back to front again. Torrey discusses how he was able to address this challenge.

“I didn’t have much difficulty once I found my ‘pivot’ point, except for how far could I extend the left side stage wall,” Torrey says. “So it would accommodate clearing the rear wall of stage, I angled this wall slightly, as I did with the front stairs to clear front edge of stage. While I made the rear stairs totally independent of the set.”

He also gives plenty of credit to his “Noises Off” crew.

“I have a very talented stage manager, Cassy Dupee, to handle this,” Torrey says. “Who, I may add, is making her ‘stage manager’ debut as well. We have several dependable stage hands, as well, to help in the transition between acts.”

There is a lot of physical comedy, much of which, in Act Two, requires a lot of pantomime. Was this difficult for the actors to pick up or were they up to the challenge?

“Great Question – the cast picked this up fairly quickly,” Torrey says, stating how he also allowed them to contribute with, ”their own thoughts for expression, gestures, reacting to what the situation was on stage. When this worked, I let them keep it in, and when It didn't, we made changes with my vision in mind.”

As for the physical side of “Noises Off,” Torrey explains how it requires a cast fairly adept at pratfalls and other elements.

“Oh yes - this play is highly demanding,” Torrey confirms. “Between quick movements, running up and down stairs, chasing people, to falls. They (the cast) were ALL up to the challenge.”

Torrey beams with pride as he describes how the cast has, “been working so very, very hard from day one of this production which started several months ago.”

“I couldn't be more proud and happy to have this cast for this production,” Torrey says. “Since auditions, they have come together from individuals to a family…and in more ways than one. Between helping each other with lines, movement, encouragement, inspiration…and without any 'drama' on stage.”

The one thing Torrey says he hopes as the curtain rises (and falls, eventually) that audiences will exit the Exit 7 Theater smiling and laughing.

“First I'd like to say ‘thanks’ to Exit 7 Theater for this opportunity and having trust in me,” Torrey says, adding he hopes audiences will, “come and see this show, to have a night where they can just sit back and relax, forgetting any problems, escape reality and, even if only for few hours, to enjoy comedy.”

Michael Frayn's "Noises Off" takes a fond look at the follies of theatre folk, whose susceptibility to out-of-control egos, memory loss, and passionate affairs turn every performance into a high-risk adventure. This play-within-a-play captures a touring theatre troupe’s production of Nothing On in three stages: dress rehearsal, the opening performance, and a performance towards the end of a debilitating run. Frayne gives us a window into the inner workings of theatre behind the scenes, progressing from flubbed lines and missed cues in the dress rehearsal to mounting friction between cast members in the final performance. Brimming with slapstick comedy, Noises Off is a delightful backstage farce, complete with slamming doors, falling trousers, and -- of course -- flying sardines!