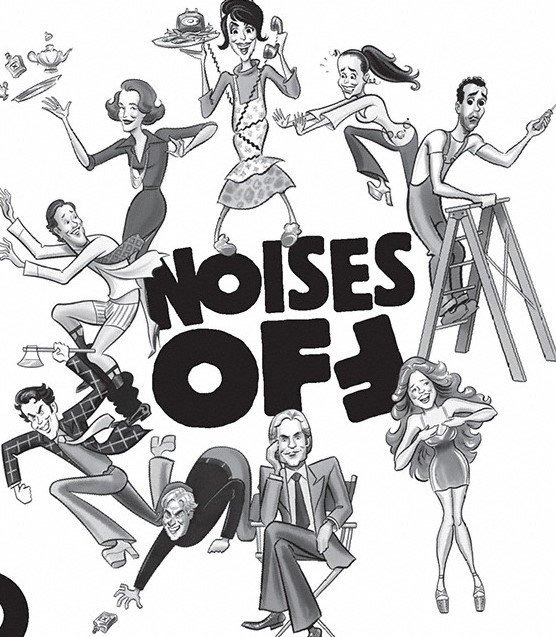 Will Hold Auditions for Michael Frayn's

Called “the funniest farce ever written,” Noises Off presents a manic menagerie of itinerant actors rehearsing a flop called Nothing’s On. Doors slamming, on and offstage intrigue, and an errant herring all figure in the plot of this hilarious and classically comic play.

Auditions will be submitted online And live at 9 Central St. All virtual auditions may be submitted before audition dates. In person will be by appointment only and you will need to be in a mask. If callbacks are necessary, a time will be scheduled with you. All audition applications are to be filled out in links.

Auditions are Aug 2 at 6 and Aug 3 at 7.  We are practicing all MA protocols with masks and social distancing.  Location - 9 Central Street, Lowell, MA - fourth floor.

Here is a break down of the characters:

English television star. Dotty is producing and performing in this show as an investment for her retirement fund. Forgetful, she often struggles to remember blocking, props, and lines. Currently engaged in an affair with her much younger castmate, Garry. In Nothing’s On, she plays Mrs. Clackett, the Brents’ Cockney housekeeper.

English; the director of the play, Nothing’s On. Temperamental. Sarcastic. Jaded. But also suave, smooth, and charming when he chooses to be. He’s secretly involved in affairs with both Brooke and Poppy.

English. Professional leading man with an unfortunate inability to finish a sentence unless it’s dialogue. Tries to keep the show going and remain positive but also prone to vicious jealousy. Currently engaged in an affair with his much older castmate, Dotty. In Nothing’s On, he plays Roger Tramplemain, an English real estate agent who is attempting to rent the Brents’ house to a Sheikh as well as use it as a place to secretly cavort with Vicki.

English; young, idealistic; inexperienced. Very attractive, but not a great actress. Spacey. A bit ditzy. Forgetful, often losing things. Blind without her contacts. Secretly having an affair with Lloyd Dallas, the director. In Nothing’s On, Brooke plays Vicki a tax authority employee who is trying to seduce Roger.

English; the assistant stage manager; earnest. Hard-working, skittish, sensitive, and highly emotional. Invested in the production. Overworked to the point of exhaustion. Secretly having an affair with Lloyd Dallas, the director. Understudy to the female roles.

English, sweet, neurotic, bumbling, and oblivious. Well-intentioned, but lacks confidence and is rather dim-witted. Fears blood and violence and is prone to nosebleeds. His wife left him during the rehearsal process. In Nothing On’s, he plays Philip Brent, the man who owns the house that the play takes place in, but is living in Spain to avoid taxes.

English, an aging, veteran actor. Forgetful, alcoholic, nearly deaf (or at least selectively deaf), and prone to napping on the job. In Nothing’s On, he plays the Burglar who breaks into the Brent household.

Please choose a monologue that best fits with the character you want to audition for. Here is a pdf i found of the script for you to peruse.

All auditions must be submit on-line through the audition form.

please pick a time and day for your audition. We are only taking appointments for in person auditions.

Rehearsals begin August 5th-September 28 and will take place every Sunday from 4-9 and Wednesday at 7-9:30

Performances will be online only.